Via    Via
MORE SCAN AND TRANSCRIPT UNDER THE CUT 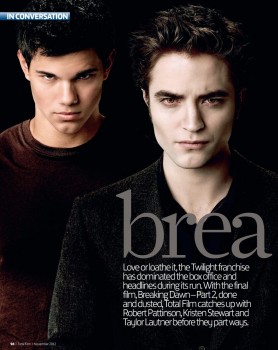 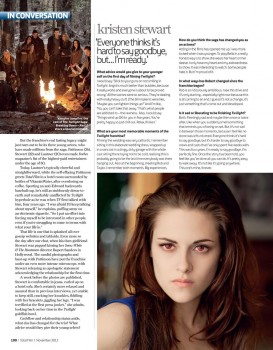 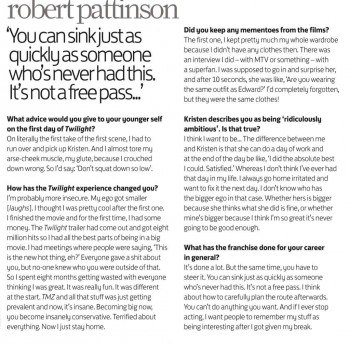 But the franchise's real lasting legacy might just turn out to be its three young who have made millions from the saga. Pattinson (26), Stewart (22) and Lautner (20) even made Forbes magazine's list of the highest-paid entertainers under the age of 30.

Today Lautner's tipically cheerful and straightfoward, while the self-effacing Pattinson greets Total Film in a hotel room surrounded by bottles of Vitamin Water, after overdosing on coffee. Sporting an anti-Edward backwards baseball cap, he's still stubbornly down-to-earth and remarkably unnafected by Twilight hyperbole as he was when TF first talked with him, four years ago "I was afraid I'd kept talking about myself," he explains putting away an electronic cigarette. "So I put an effort into forcing myself to be interested in other people, even if you're struggling to come to terms with what your life is."

What advice would you give to your younger self on the first day of Twilight?
Robert Pattinson: On literally the first take of the first scene, I had to run over and pick up Kristen. And I almost tore my arse-cheek muscle, my glute, because I crouched down wrong. So I’d say: ‘Don’t squat down so low’.

How was the Twilight experience changed you?
RP:  I’m probably more insecure. My ego got smaller [laughs]. I thought I was pretty cool after the first one. I finished the movie and for the first time, I had some money. The Twilight trailer had come out and got eight million hits so I had all the best parts of being in a big movie. I had meetings were people were saying, ‘This is the new hot thing, eh?’ Everyone gave a shit about you, but no-one knew who you were outside of that. So I spent eight months getting wasted with everyone thinking I was great. It was really fun. It was different at the start. TMZ and all that stuff was getting prevalent and now, it’s insane. Becoming big now, you became insanely conservative. Terrified about everything. Now I just stay at home.

Did you keep any mementoes from the films?
RP: The first one, I kept pretty much the whole wardrobe because I didn’t have any clothes then. There was an interview I did – with MTV or something – with a superfan. I was supposed to go in and surprise her, and after 10 seconds, she was like, ‘Are you wearing the same outfit as Edward?’ I’d completely forgotten, but they were the same clothes!

Kristen describes you as being ‘ridiculously ambitious’. Is that true?
RP: I think I want to be…The difference between me and Kristen is that she can do a day of work and at the end of the day be like,’I did the absolute best I could. Satisfied.’ Whereas I don’t think I’ve ever had that day in my life. I always go home irritated and want to fix it the next day. I don’t know who has the bigger ego in that case. Whether hers is bigger because she thinks what she did is fine, or whether mine’s bigger because I think I’m so great it’s never going to be good enough.

What has the franchise done for you career in general?
RP:  It’s done a lot. But the same time, you have to steer it. You can sink just as quickly as someone who’s never had this. It’s not a free pass. I think about how to carefully plan the route afterwards. You can’t do anything you want. And if I ever stop acting, I want people to remember my stuff as interesting after I got given my break.


In what ways has Robert changed since the franchise began?
Kristen Stewart: Rob is ridiculously ambitious. I see this drive and it’s only starting…especially right now because this is all coming to an end. I guess it’s not a change, it’s just something that’s come out and developed.


How have you changed since the franchise began?
Taylor Lautner: Myself, Rob and Kristen have grown up a lot. But they're the same people they were four years ago. They're not affected by this. I hope they'd say the same about me.