Edward,Bella and Jacob in Pepsi Can

On the occasion of the release of the final chapter of the most viewed sagas of recent years, The Twilight Saga: Breaking Dawn - Part 2, scheduled for November 14, Pepsi will launch three new limited edition cans of film protagonists, Bella, Edward and Jacob. All to collect.

The collaboration between Pepsi and Breaking Dawn, however, does not end here! To celebrate the release of the film has launched a new contest that gives consumers the chance to win great prizes. From 15th October to 15 January 2013 for the purchase of 1.5 L and 2L Pepsi, Pepsi and Pepsi Light 1.5L 1.5L Turn and enter the contest, all fans of the series can relive the dream of the film that has charmed millions of teenagers worldwide. Calling or visiting 06.91810486 Official Website or Fanpage Facebook PepsiItalia Italy will be able to demonstrate that they are true fans of the series, correctly answer a question about the movie. After inserting the data reception, participants will discover immediately if they have won one of the great prizes: two t-shirt original film per day, the two DVDs of The Twilight Saga: Breaking Dawn Part 1 and Part 2 a week and the final draw, a Smart TV and Home Cinema System Samsung to review all films in the series.

* Note: These limited edition cans of Breaking Dawn Part 2, is only valid for Italy 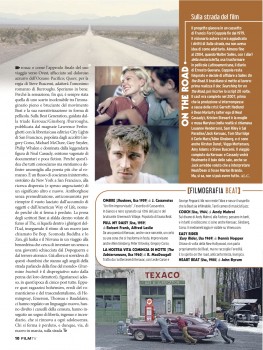 Email ThisBlogThis!Share to TwitterShare to FacebookShare to Pinterest
Labels: 2012, italy, magazine, October, on the road, scan

Wow there are signatures on there dJHSDHSADF COOL!!

From ads to hanging out with Kristen Stewart, how a London actor rose from obscurity to find fame On The Road
(...)
LondonEveningStandard   But within two weeks of being cast, he flew to Canada to join Sam Riley, in the Kerouac role, and Tom Sturridge, as the Beat poet Allen Ginsberg, in the star-studded cast, with Kristen Stewart as the wife of one of the gang.

And Morgan admits it took a little while to get to know Stewart and Mortensen. “They weren’t being distant, I was a bit starstruck. But we went out quite a bit to bars and Kristen would come along. She might have security but most of the time people were cool.”

“At airports, there would be thousands of people screaming ‘Kristen’ and going mental. It must be tough. I don’t envy it. I was very impressed by how well she handles it at such a young age.”

“The composer Gustavo Santaolalla had seen one of the first cuts of Sean Penn’s Into the Wild and was so impressed that he told me, ‘Don’t look anymore for Marylou – just meet this girl’,” the director recalls. “Kristen was indeed everything we were looking for. She knew the book extremely well and she understood Marylou's essence – an independent spirit, a young woman who was way ahead of her time.”
Via
ENJOY..-V- XOXO
GOD bless you
Posted by R/K Clan at 11:53 AM 0 comments

Email ThisBlogThis!Share to TwitterShare to FacebookShare to Pinterest
Labels: cast, Kristen Stewart, mention, on the road

According to Aurum Producciones Facebook Page, Rob, Kristen & Taylor are expected to make a stop in Spain to present Breaking Dawn Part 2.

Translation:
On November 15, all three of the Twilight Saga’s protagonists will visit our country to present the highly anticipated and final installment of one of the most succcesful saga’s of all times. Robert Pattinson, Kristen Stewart, Taylor Lautner, along with producer Wyck Godfrey and Director Bill Condon, will be in Madrid that day to officially close up the saga. At the moment we have no further details, so we won’t be able to answer any questions. Please be patient, we’ll update you guys as soon as we have more details.

WARNING SPOILER ALERT!!
The video is the same as target DVD clip and Comic-Con Clip

AccessHollywood    LOS ANGELES, CALIF. -- Robert Pattinson & Kristen Stewart are just weeks away from the debut of the final installment of “The Twilight Saga,” but first they’re getting the MAD Magazine treatment – and AccessHollywood.com has your exclusive sneak peek!

The on and newly-rekindled-off-screen duo – along with the magazine’s Alfred E. Neuman appearing as their onscreen vampire daughter Renesmee – has landed on the December 2012 cover of the humor mag.

MAD Magazine Editor in Chief John Ficarra said the “Breaking Dawn” stars were “unavailable” to pose for the cover for variety of reasons.

“We tried to get celebrity help with this cover, but of the three, the werewolf was the only one that was approachable,” he joked in a statement to Access Hollywood. “We really wanted to get Robert Pattinson involved, but didn’t have the budget for an eyebrow wrangler.”

Adding, “We were all set up to work with Kristen Stewart and Robert Pattinson, but they had to cancel because it conflicted with their weekly Brooding Lesson.”

Check out the issue, due out on October 23, which will spoof all five of “The Twilight Saga” movies.

“The Twilight Saga: Breaking Dawn – Part 2” hits theaters on November 16, 2012, but first Robert and Kristen are scheduled to appear together – along with the rest of the cast – to promote the movie in a variety of media appearances in Los Angeles.

“Breaking Dawn – Part 2” will have its worldwide premiere on November 12 at the Nokia Theater at LA LIVE.

Movie.ie
Kristen Stewart talks On The Road & Twilight
How are you finding your post-Twilight career?
KS: The only time I have ever had to answer that question is in an interview. I don't look for anything. It's a very odd thing to pretend to be someone else and let people watch you do that. It really takes something special and I never know what that is until I find it. People who put movies into boxes... Into genres... When life is really sad, it's really funny too and what is that? Is it a dark comedy? Or is it a dramedy? Or is it a drama that's sometimes funny? I have no desire to...This sounds so pretentious, but I don't want to be in the entertainment industry, movies can be pretty important if you want them to be, and it's the only time I feel like it's worth doing such a ridiculous thing as acting in a film.

MORE Q AND A UNDER THE CUT

Email ThisBlogThis!Share to TwitterShare to FacebookShare to Pinterest
Labels: interview, Kristen Stewart, on the road, twilight

Scan: New Moon in The Guinness Book of Record 2013

Eclipse in Guinness Book of Record 2013 HERE
Via
ENJOY..-V- XOXO
GOD bless you