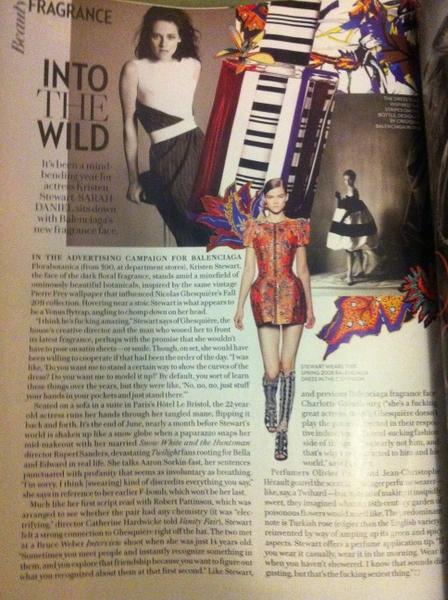 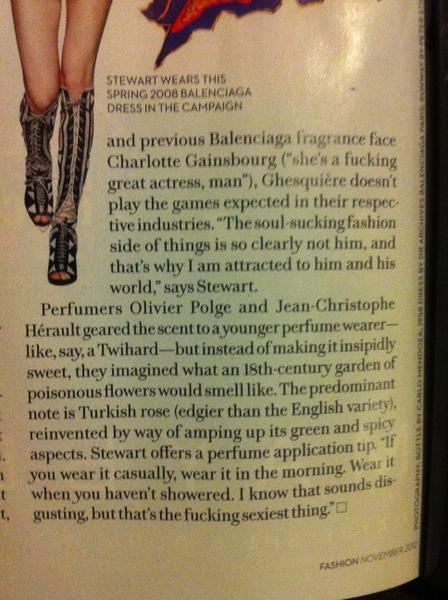 In the advertising campaign for Balenciaga Florabotanica (from $90 at department stores), Kristen Stewart, the face of the dark floral fragrance, stands amid a minefield of seemingly beautiful botanicals, inspired by the same vintage Pierre Frey wallpaperthat influenced Nicholas Ghesquiere's Fall 2011 collection. Hovering near a stoic Stewart is what appears to be a Venus flytrap, angling to chomp down on her head.

"I think he is f*cking amazing," Stewart says of Ghesquiere, the house's creative director and the man who wooed her to front its latest fragrance, perhaps with the promise that she wouldn't have to pose on satin sheets - or smile. Though, on set, she wouldn't have been willing to cooperate if that had been the order of they day. "I was like, 'Do you want me to stand a certain way to show the curves of the dress? Do you want me to model it up?' By default you sort of learn those things over the years, but they were like, 'No, no, no, just stuff your hands in your pockets and just stand there."

Seated on a sofa in a suite in Paris's Hotel Le Bristol, the 22-year-old actress runs her hand through her tangles mane, flipping it back and forth. It's the end of June. She talks Aaron Sorkin-fast, her sentences punctuated with profanity that seems as involuntary as breathing. "I'm sorry, I think [swearing] kind of discredits everything you say," she says in reference to her earlier F-bomb, which won't be her last.

Much like her first script read with Robert Pattinson, which was arranged to see whether the pair had any chemistry (it was "electrifying," director Catherine Hardwicke told Vanity Fair), Stewart felt a strong connection to Ghesquiere right off the bat. The two met at a Bruce Weber Interview shoot when she was just 14 years old. "Sometimes you meet people and instantly recognize something in them, and you explore that friendship because you want to figure out what you recognized about them at that first second." Like Stewart, and previous Balenciaga fragrance face Charlotte Gainsbourg ("she's a fucking great actress, man"), Ghesquiere doesn't play the games expected in their respective industries. "The soul sucking fashion side of things is so clearly not him, and that's why I am attracted to him and his world," says Stewart.

Perfumers Olivier Polge and Jean-Christophe Herault geared the scent to a younger perfumer wearer-like, say, a Twihard- but instead of making it insipidly sweet, they imagined what an 18th-century garden of poisonous flowers would smell like. The predominant note is Turkish rose (edgier than the English variety), reinvented by way of amping up its green and spicy aspects. Stewart offers a perfume application tip, "If you qwear it casually, wear it in the morning. Wear it when you haven't showered. I know that sounds disgusting, but that's the fucking sexiest thing."